Like our work? Arrange a meeting with us at our office, We'll be happy to work with you!

We are always looking for new talents and we were expecting you. Time to apply, buddy!

The solo exhibition of Nikolett Balázs, an artist of the youngest generation of the Hungarian art scene, articulates our power structures in her textile works. The current selection of the artist’s latest works, entitled Thirsty Well, is a series of dramatic objects and installations that deal with the political and economic attitudes of recent times. How can these power strategies be captured in a multilayered, symbolic story through a sensual and unconventional language?

Nikolett Balázs works mainly with the iconic material of 20th century women artists, the raw jute canvas used by Ilona Keserü or Marina Abakanowicz, similarly stiffening the crumpled, shaped textile. Nikolett Balázs inhabits the space with her strange sculptures, completing the existing world with this missing formal order of hers. The rippling folds, which open and close like flowers, intertwine many layers of meaning beyond the feminist vulva symbolism, from folkloric tulip motifs to the symbolism of totemic individuality on flayed skin.

The exhibition in Artkartell’s projectspace gathers objects around a well, constructed from painted or untreated raw canvas, scrap metal, tile adhesive, pur foam and XPS insulation boards. The works, hung on the wall with a crisp, dry effect, take on anthropomorphised forms, surrounding the fountain where the life-giving water dries up under oil stains, in a stale vat. The “thirsty well” is an oxymoron, a tank full of tense contradictions where water is out of place. An emblematic nylon foil used in the agriculture of today’s farm world leads to the lord of the well, the supreme textile sculpture that – as a deity, the crowned head of the throne room – holds sway over the precious fluid. Around it, a hierarchy of subordinate artworks are lined up, with painted elements, shiny shavings, sponges and pipes. In the side storage room next to the main exhibition space – arranged around a sacred water source -, sterile water pouches, extracted from the well, hang from the ceiling just like in a larder. With Thirsty Well, Nikolett Balázs has created a world with strange atmosphere and enigmatic symbolism, in which subconscious emotions and the idea of the Garden play as important a role as the feminist approach, the recycling of objects evoking the rural milieu or the representation of fresh water, namely the power manoeuvres trying to dominate other countries and groups of people. 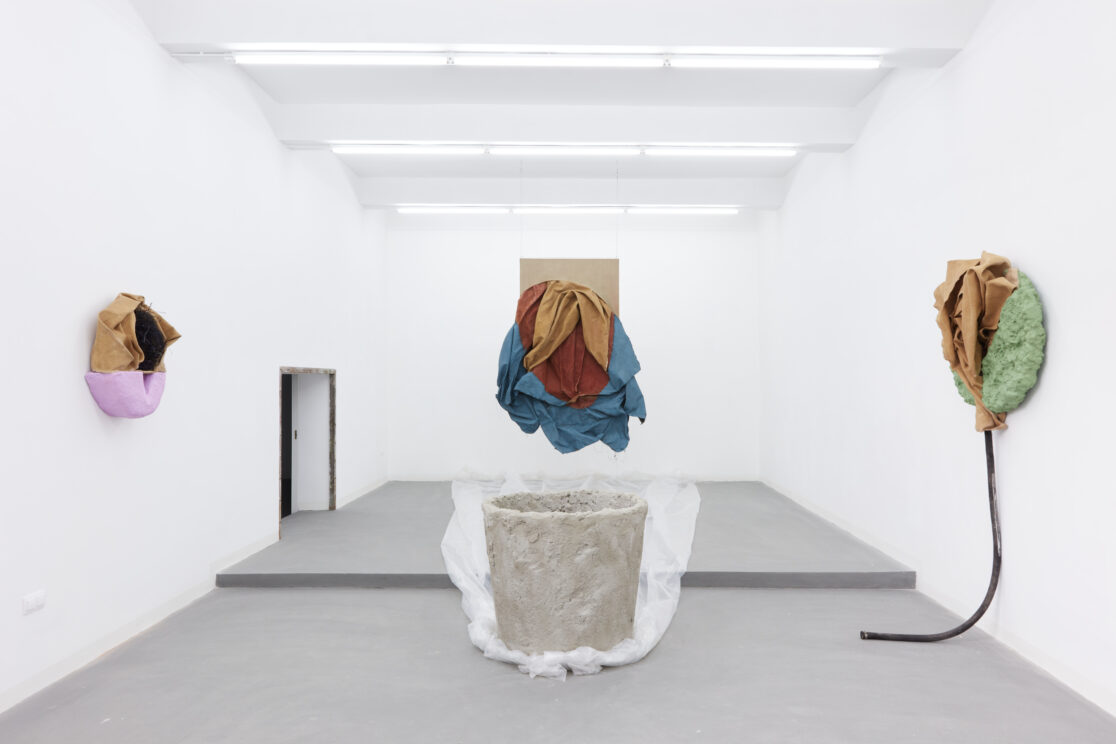 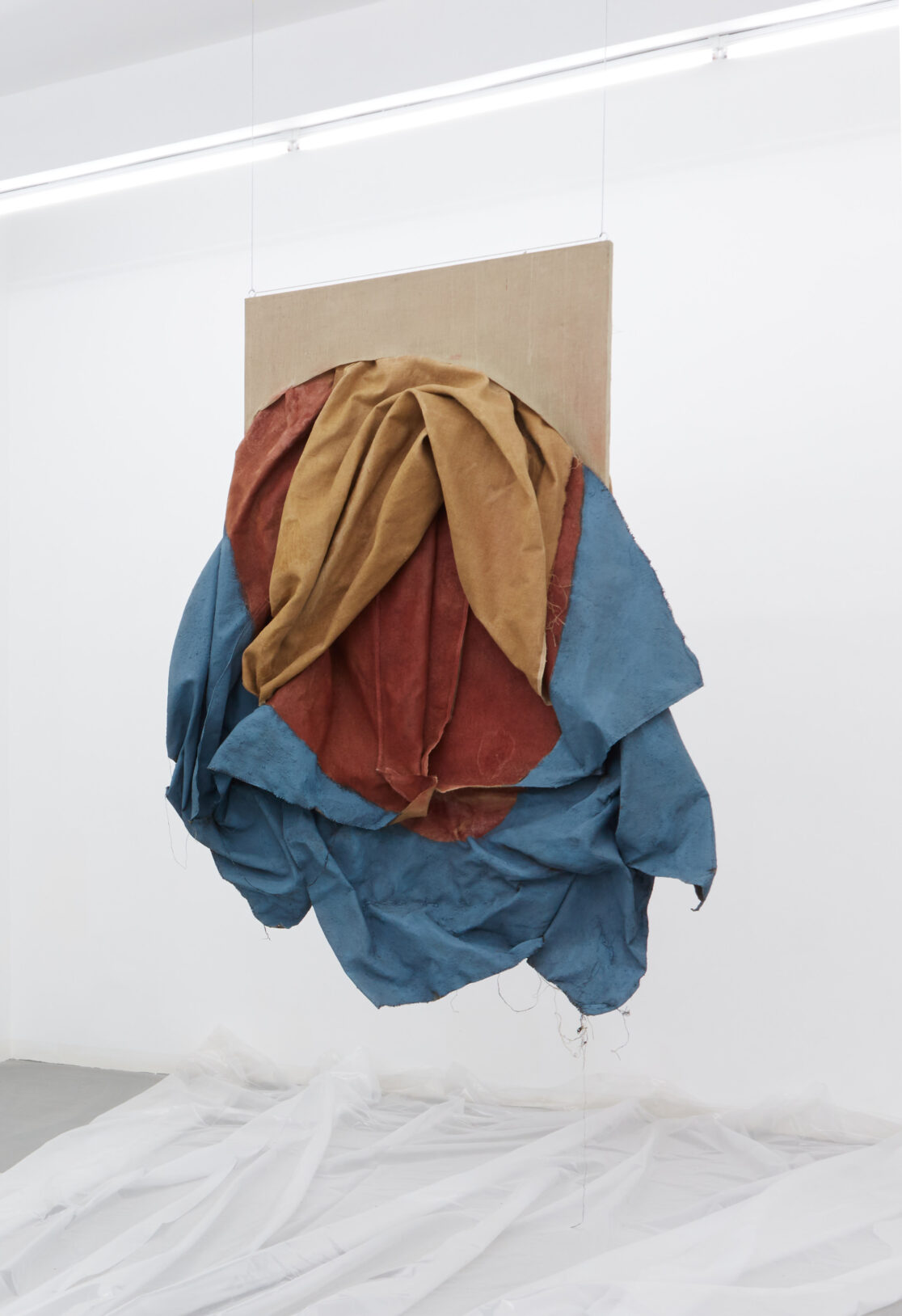 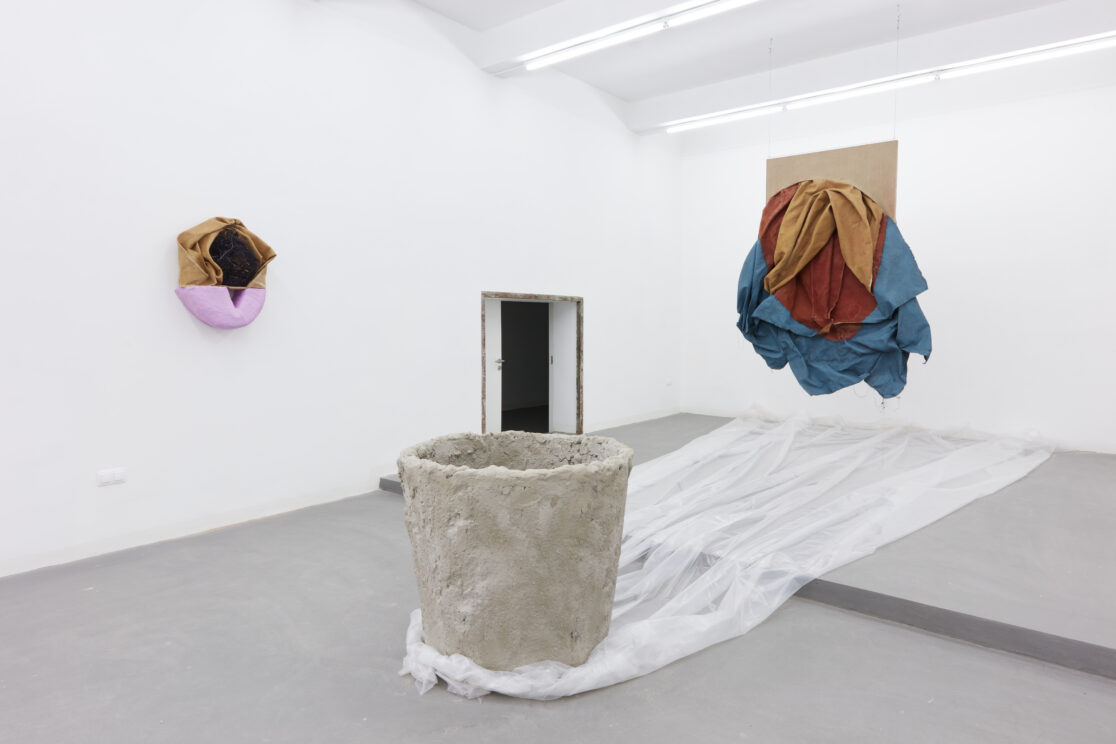 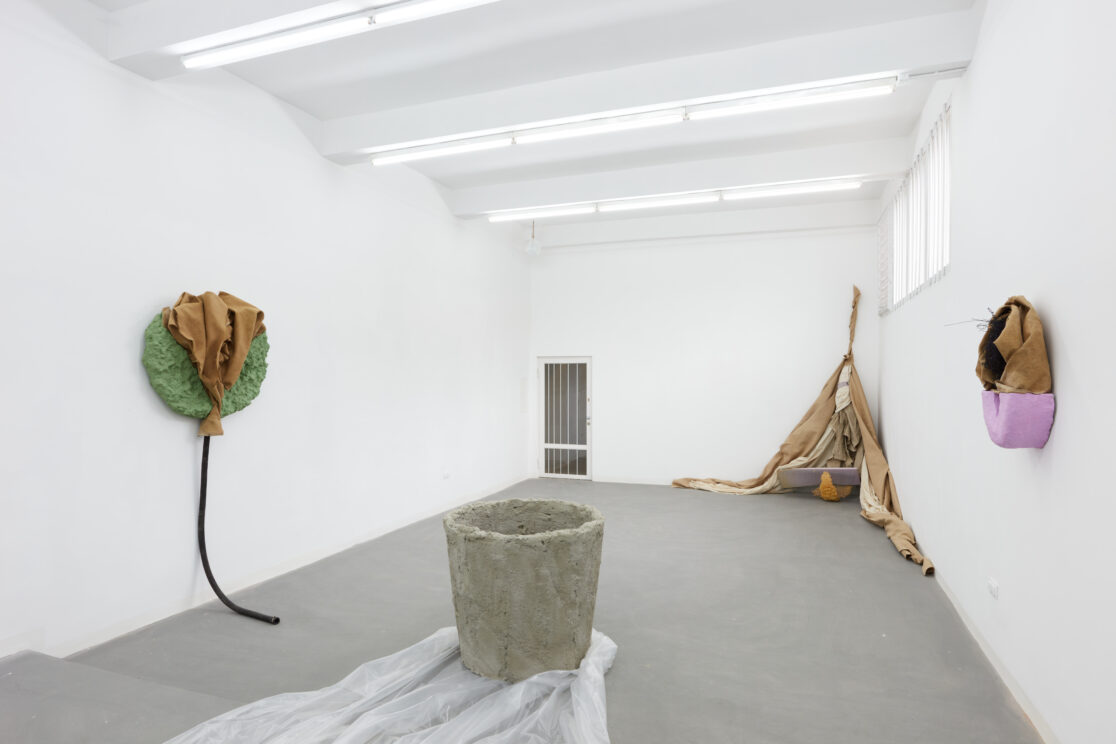 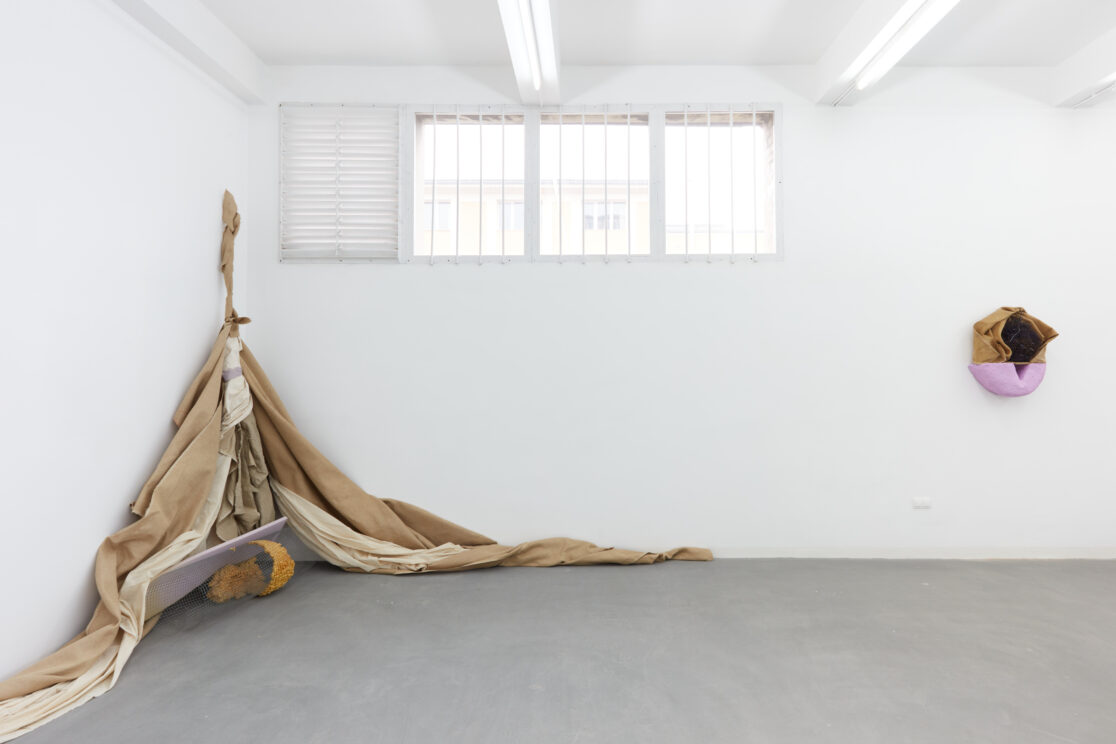 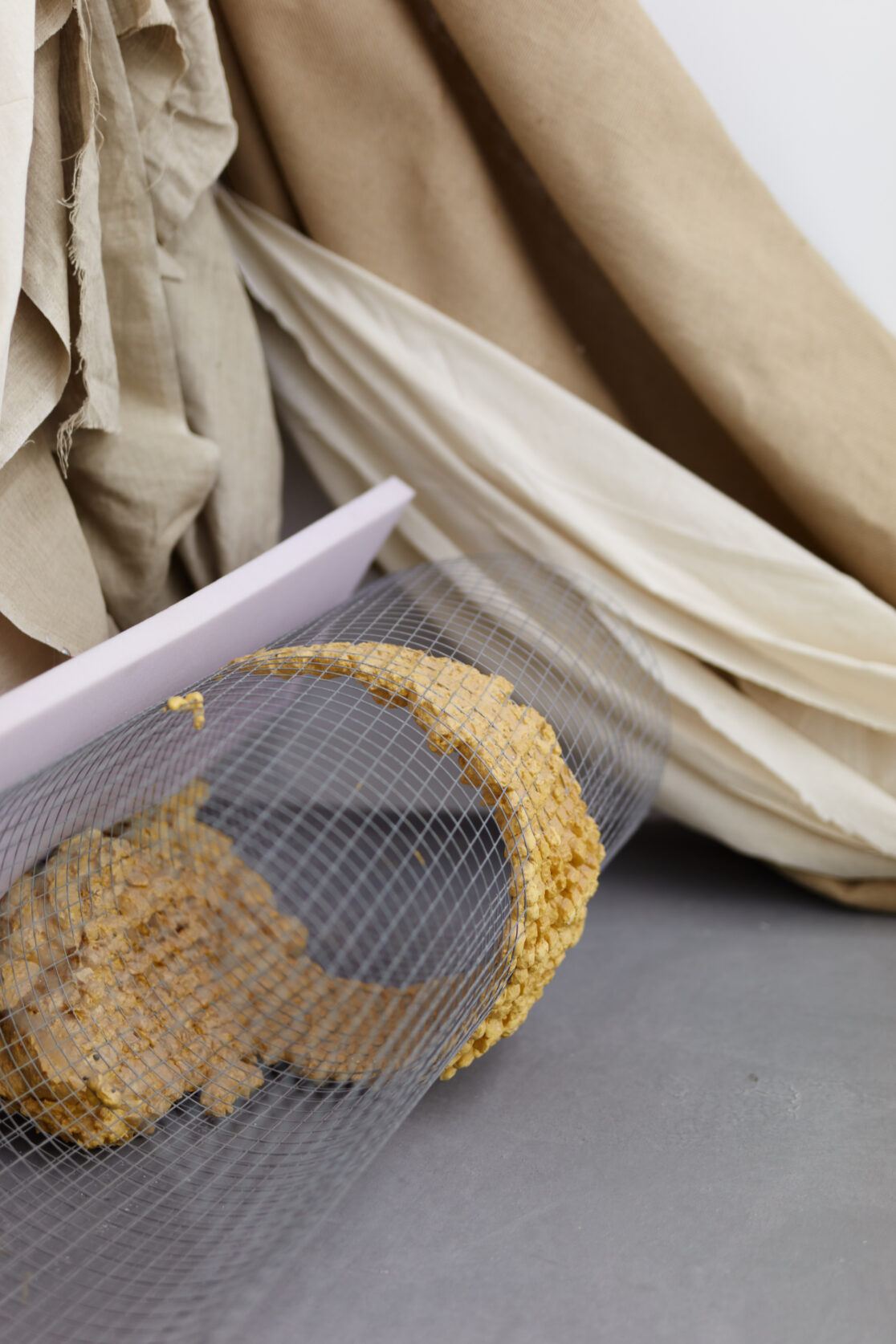 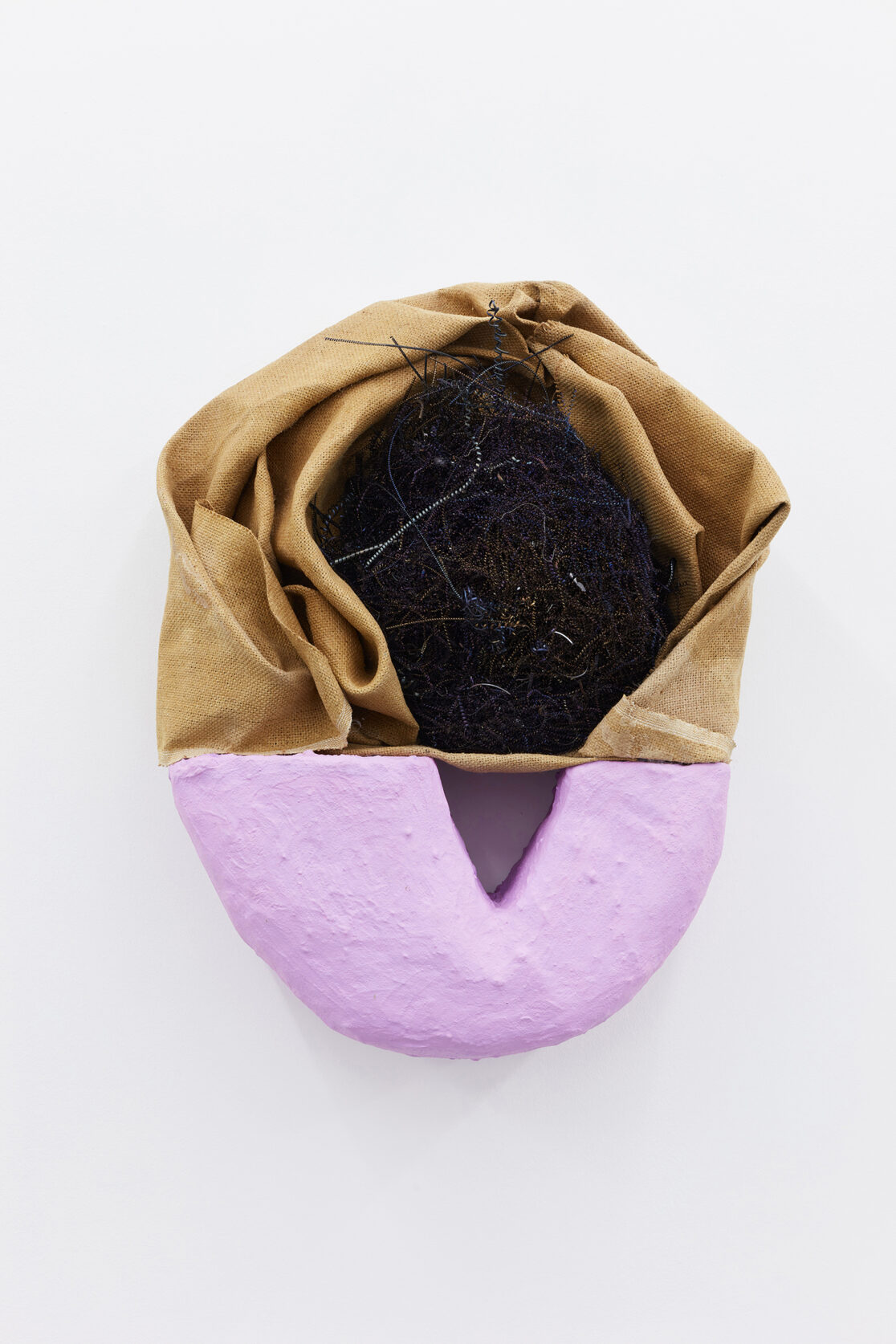 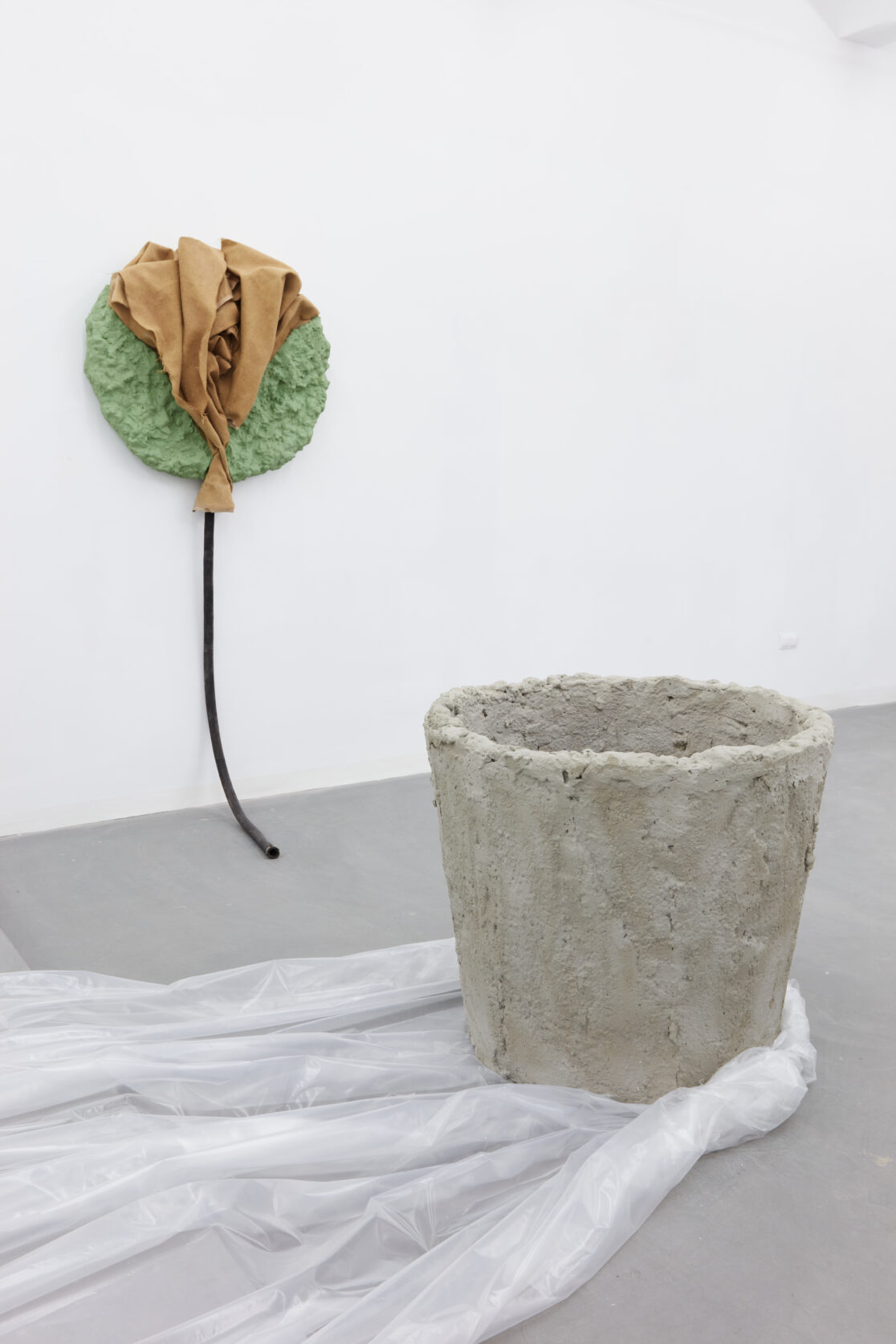 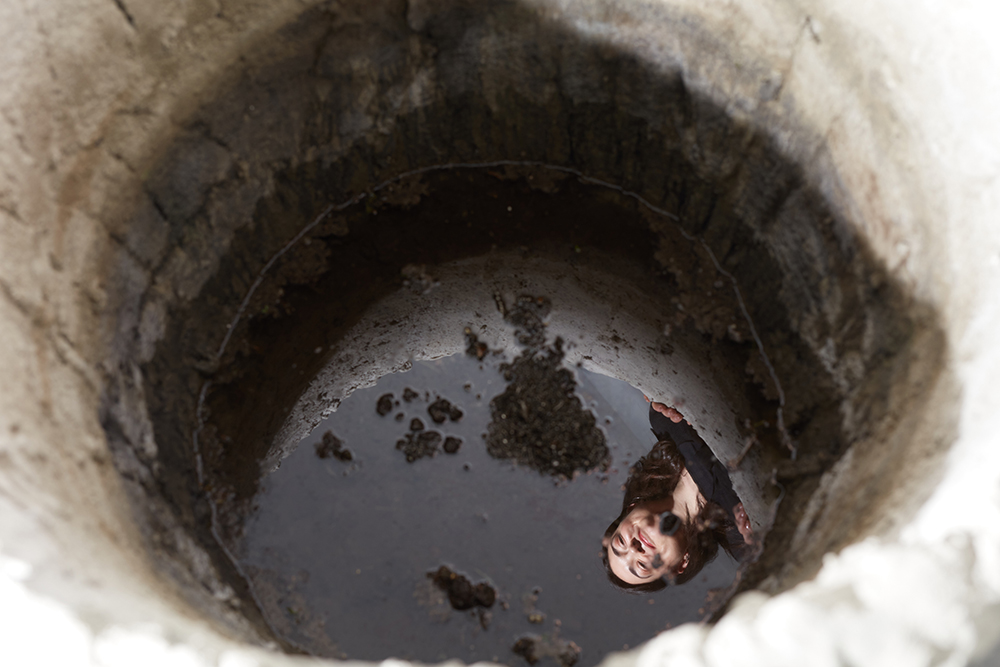 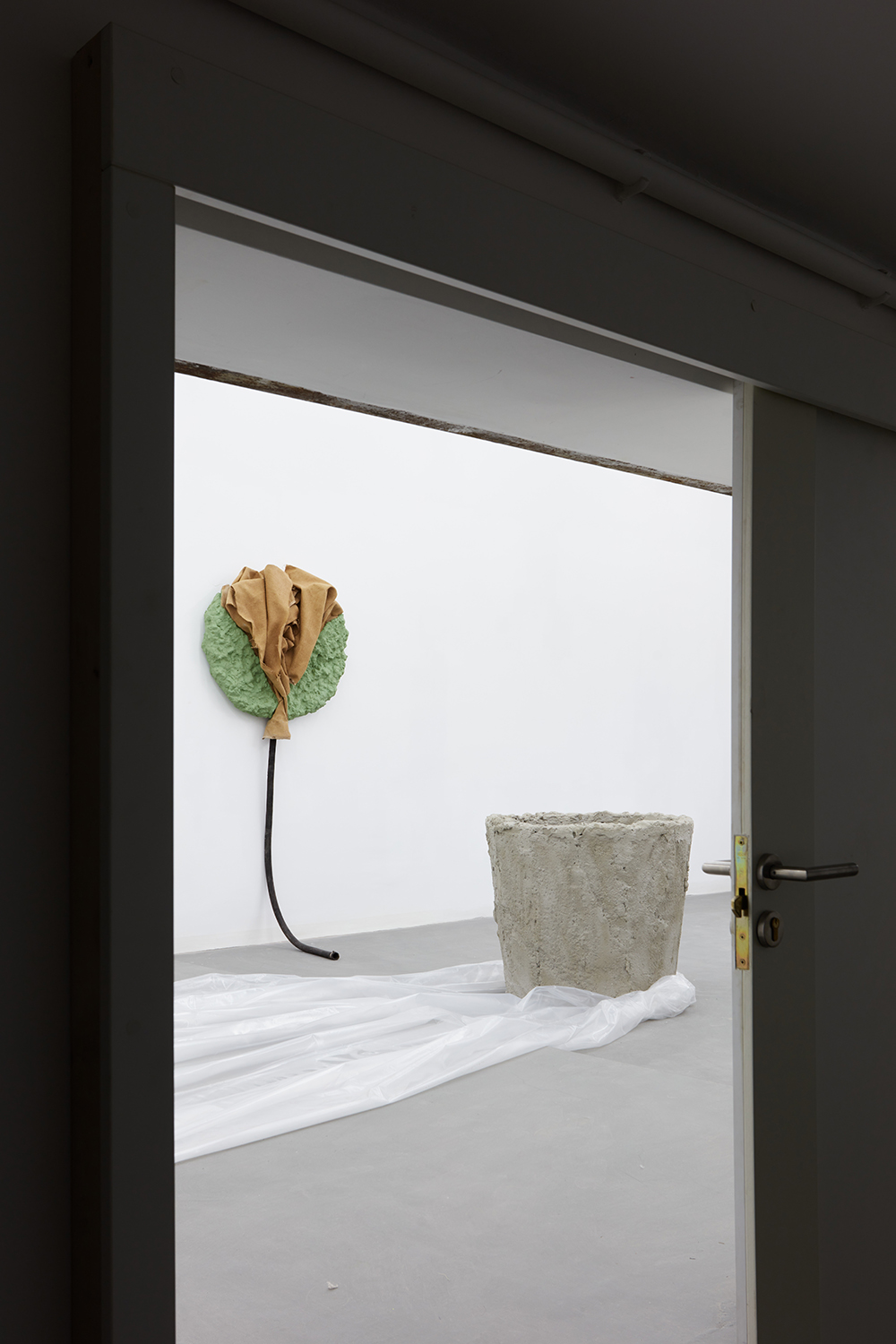 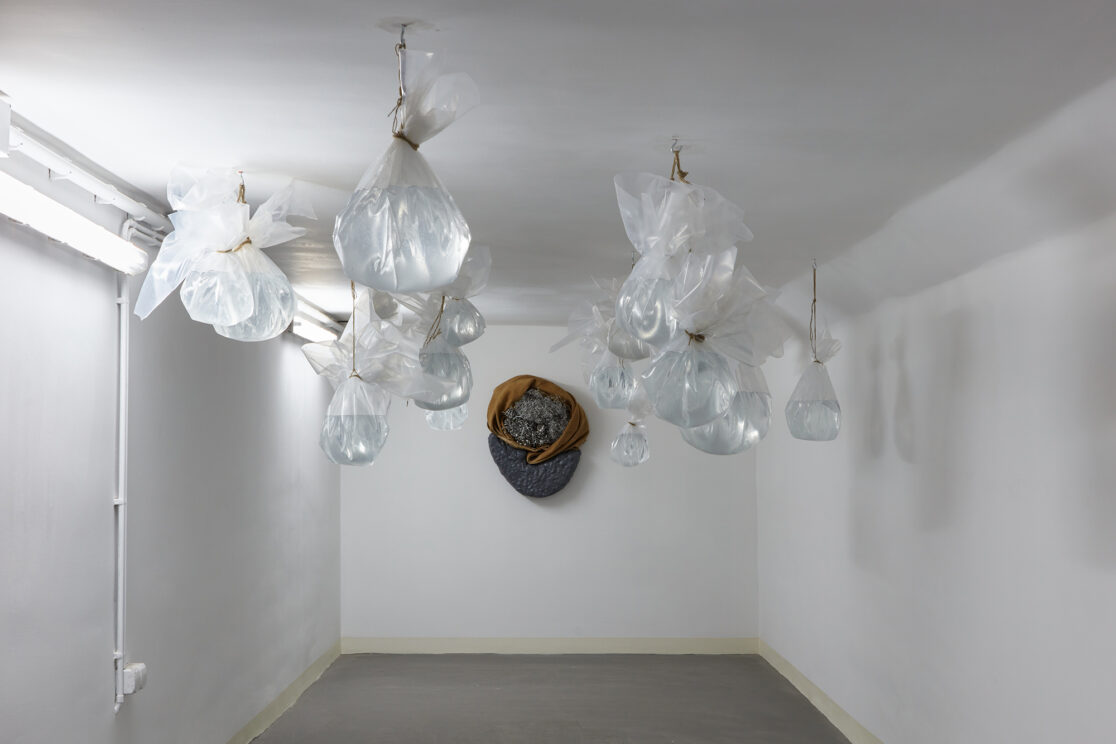 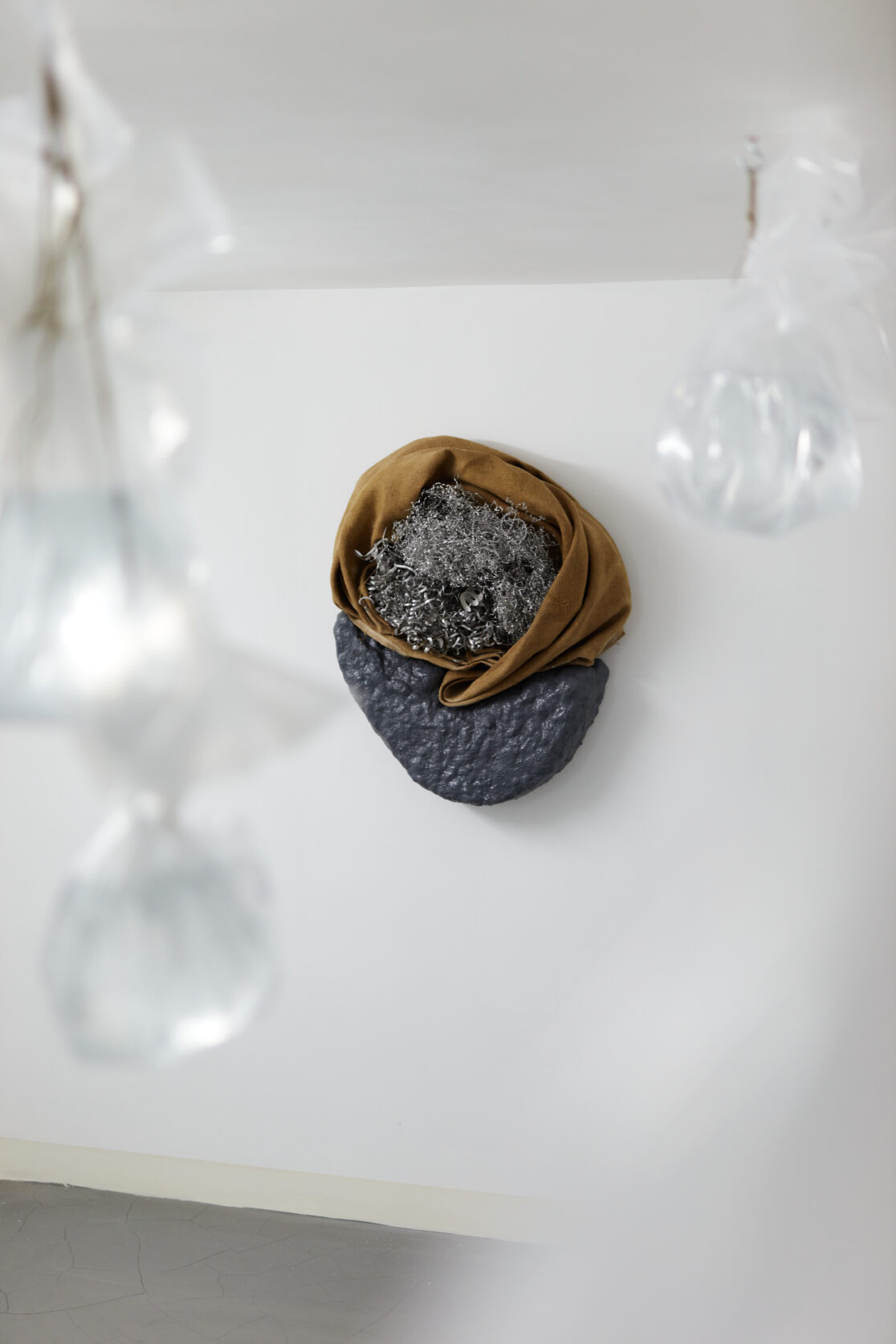 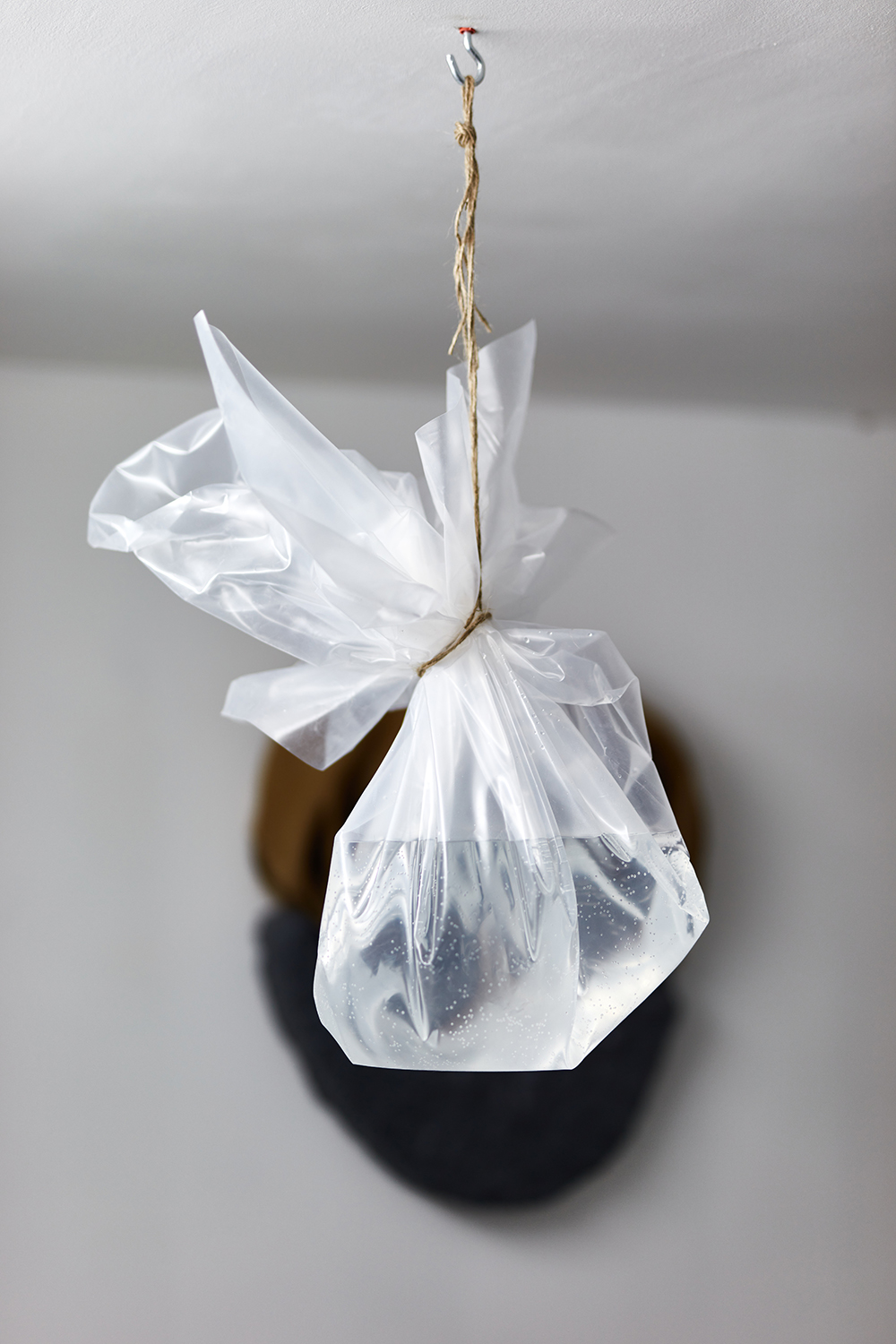